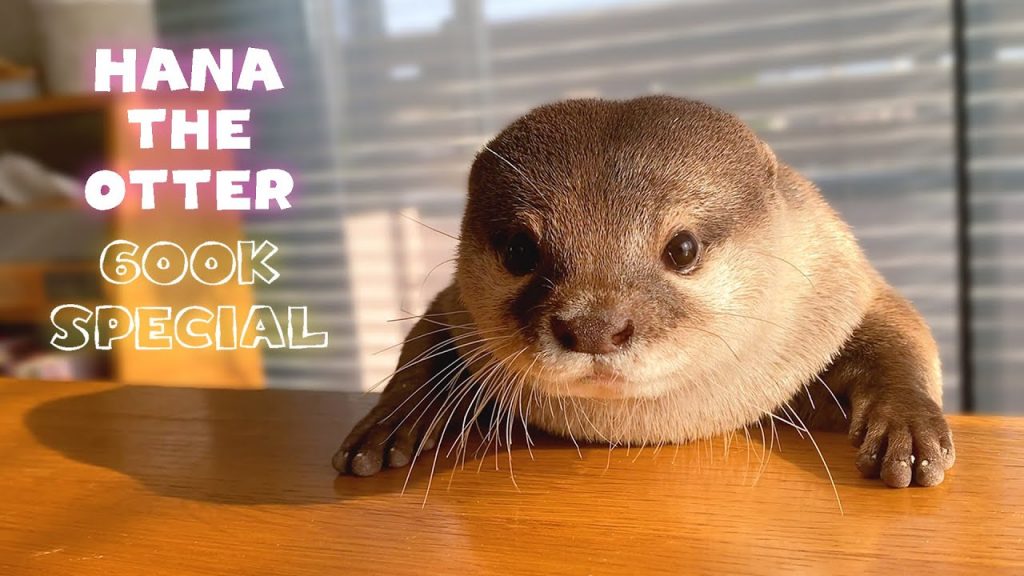 Clicking the image will load a video from YouTube ®
Featuring:
Hana

To celebrate the 600K YouTube subscribers, Kotsumet made a video to introduce to you Hana, the cutest otter online.

Everyone who meets her is charmed by her friendly and bubbly personality, along with her sweet, endearing face and expressive tail.

Approximately one year after Kotaro joined the family, Hana became part of it, a three-month-old baby otter girl. She and Kotaro quickly developed a strong bond and Hana was always following him around. Her twin brother, Komugi, resides at the Loutre Otter Cafe and sometimes pays them a visit.

As a true foodie, she has become a bit chubby due to snatching Kotaro’s food when he’s not paying attention. Consequently, she’s been put on a diet and made to increase her exercise. Whenever her belly is measured, she growls with displeasure.

She is an energetic and mischievous player when it comes to wrestling with her toys, often breaking things that are not otter-proof. She loves being the center of attention; however, in unfamiliar places outside, she can be shy and is known to hide in bags and backpacks.

Her favorite foods are salmon, freshwater fish, scallops, and chicken, which she eats much quicker than Kotaro. So, while Kotaro is still eating, she finishes her meal and sometimes successfully tries to steal his food, or getting a fierce hiss in response.

If reprimanded by dad, she learned to take corrective action, resulting in such improvements in her behavior that she even brought extra food to Kotaro who was playing in the bathtub.

Hana has a playful spirit and loves to juggle anything that fits in her hands, such as pebbles, nut shells, and even food she may not enjoy.

She can get quite boisterous when she has her sights set on something she wants, as well as when she eats her favorite dishes or even while doing laps in the pool. Still, her bubbly personality is very endearing to all who know her.

One of her favorite sports is rolling (an otter thing), as well as swimming, and doing backflips in the bathtub. She also wrestles and plays tag with Kotaro on a daily basis.

Though her favorite pastime is accumulating ribbons, purses, garments and towels to construct a nest in various locations in the residence.

Hana with her energy and enthusiasm will always bring a smile to your face and warm your heart. Stay safe, stay healthy, and keep on Otter-ing!